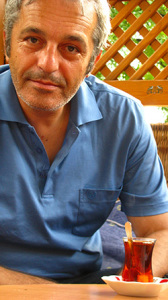 Sarbay was the auteur and director of some of the best known Turkish live television shows, with an astonishing episode count of well over than 1800 episodes.

He completed primary, junior high and high schools in Eskişehir.

He started drawing cartoons when he was 15 years old. His cartoons had been published by famous Turkish cartoon magazines such as Gırgır, Fırt, Karakedi, Davul, Çarşaf and Düşünce; and daily newspapers like Milliyet, Tercüman, Ortadoğu, Hergün, Millet, Yeni Devir, Milli Gazete and Büyük Gazete.

When he was 18 years old, he produced a local newspaper named Hakimiyet (10 issues) and a mensuel magazine named Genç Liseli (4 issues).

After graduating from university, he started working at editorial and technical offices of different daily newspapers.

His works on history had been published on many magazines, such as Tarih ve Medeniyet, Tarih ve Düşünce and Yedi Kıta.

In 1992, he took part in TGRT‘s, one of the first Turkish privately held TV Channels, founder staff.

In 1996, he had assigned as the general manager of İFPAŞ (İhlas Film Production Company).

Sarbay was the auteur and director of some of the highest-rated live TV shows of its kind in Turkish TV history, primarily focused on missing people and marriage.